Explore Sir Walter Scott's amazing home with our knowledgeable guides and discover the inspiration behind the author's famous books and poems.

Come and celebrate the 250th anniversary of the birth of Walter Scott with a guided tour of his wonderful home during the Borders Book Festival.

Discover the 19th-century poet and best-selling author of Waverley, Ivanhoe and Rob Roy, a man revered as the father of historical fiction and widely regarded as Scotland's Greatest Storyteller.

See the desk where Scott laboured late into the night, quill pen in hand, to clear his debts. Wonder at his extensive collection of books, now one of the most important writer's libraries in the world.

Marvel at his fantastic collection of historical objects, which inspired his writing, including a suit of armour from the pages of Ivanhoe and the arms of the folk hero and outlaw, Rob Roy.

Tickets are also available for Borders Book Festival events at Abbotsford on their website. 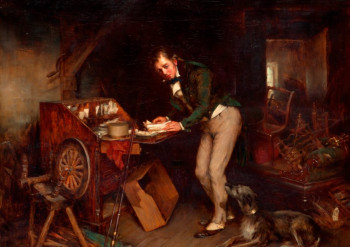 Sir Walter Scott finding the manuscript of 'Waverley' in a desk in the attic.