The connection between Abbotsford and the Faculty of Advocates started when Scott became a member of Faculty in 1792 and has continued ever since.

The Faculty’s library, the Advocates Library, was the prominent library of the time in Scotland and acted, more or less, as the national library in all but name. The Faculty itself has always been an important and prominent organisation and has taken its role as such very seriously.

When Scott’s son entailed the Abbotsford estate in 1839, the Faculty of Advocates would have been the obvious organisation to which to pass ownership of the Abbotsford collections in the event of that entail being broken. The entail was indeed broken, in 1954, and the care of the library and various other collection items became the responsibility of the Faculty.

While the Maxwell Scott family lived at Abbotsford, the Faculty happily deferred to them and it was not until 1993 that Brian Gill, later Lord Gill, Lord President of the Court of Session, appointed Professor Douglas Gifford of the University of Glasgow as Honorary Librarian for Abbotsford and established the Abbotsford Library Project Trust (1996). At the same time, an advisory committee was established with representatives from the Faculty, Abbotsford, National Library of Scotland and the universities of Glasgow, Edinburgh and Aberdeen providing guidance and practical assistance in conserving the Abbotsford library and making it more accessible. Over the following decade a number of initiatives helped to open up the library, including a full stock check and continues today. Currently, the Faculty of Advocates Abbotsford Collection Trust is chaired by the Dean of the Faculty of Advocates and the Honorary Librarian for Abbotsford is Professor Alison Lumsden of the University of Aberdeen.

As opening up access to the library is an important part of the Trust's work, special projects include the recent facsimile limited printing of Robert Burns' The Fornicators Court introduced by Gerard Carruthers & Pauline Gray (ISBN 978-0-9561291-0-9) in conjunction with the Faculty of Advocates. Only 'privately printed' upon publication, the poem from 1786 is among the rare books in the Abbotsford library. The facsimile also contains a manuscript version in Burns’s hand of the lyric O Saw Ye My Maggie, making this a unique publication. 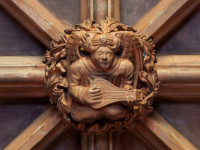 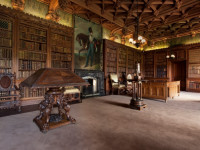 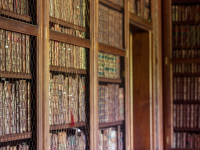 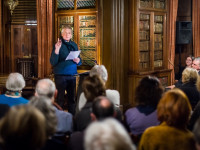 As the recognition of the importance of the Abbotsford library grew, the committee focussed on the need to have an online catalogue of its contents. The Faculty of Advocates agreed to provide funds for a rare books cataloguer, Lindsay Levy, to catalogue the books to the highest international standards. This work was completed in 2013. The resulting catalogue records now form part of the online catalogue of the Advocates Library.

Images of Scott’s annotations to his books have now been added as links from the catalogue records. Abbotsford and the Faculty are grateful to the Carnegie Trust for the Universities of Scotland which provided a grant enabling the cataloguing to be done more quickly and for the annotations to be captured.

In addition to the catalogue, programmes of research, conservation and publication have been undertaken. A preliminary study of Scott’s chapbook collection was carried out and two Scott manuscripts were published: in 2004, Reliquiae Trotcosienses edited by committee members Gerard Carruthers and Alison Lumsden, Scott’s humorous account of the making of his Library and Collections; and in 2007 an online publication of Sylva Abbotsfordiensis, Scott’s account of planting on his estates.

The Faculty and Abbotsford continue to benefit from the expertise of the advisory committee, which now also includes representation from the National Trust for Scotland and the National Museums of Scotland.

The great art of life, so far as I have been able to observe, consists in fortitude and perseverance Sir Walter Scott share this tweet